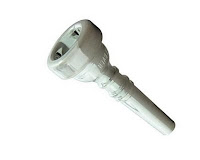 Following on from my article about choosing a cornet mouthpiece which includes a discussion of balancing out the resistance I thought I would share my knowledge of  cornet mouthpiece throat sizes. I have converted the sizes to US drill sizes for easier comparison. For a description of what these sizes mean see Jim Donaldson's very informative article here.

Bach
Standard - #27, 3.66mm
Megatone - #26, 3.73mm (larger throat designed to overcome the tight feeling that results from the larger mass of the megatone mouthpiece)

Bach used to (maybe still) do custom mouthpiece work and I have seen a 5V (very deep V cup) with a larger #20 throat that was stamped "20" in the factory.

Schilke now make deep V shaped "symphony" models. I do not know what throat sizes these use.

These mouthpieces were originally designed for the old Imperial and early Sovereign cornets which had more resistance than current models. I feel that they tend to encourage over blowing in modern, freer blowing, instruments. Wick seem to have recognise this issue by making  a 4 ½ which is identical to the 4 but with a narrower #16 throat.


Other factors
The shape of the cup of a mouthpiece also affects resistance with flatter, shallower cups generally being more resistive. You can test the relative resistances of two mouthpieces by running a constant stream of water into them from a tap and observing how much it will take before the cup starts to overflow. Its surprising how much some apparently small mouthpieces will take (try comparing a smaller Jet-Tone trumpet mouthpiece with a standard Bach 7c - the apparently small Jet-Tone will handle as much flow).
Posted by Gordon

Email ThisBlogThis!Share to TwitterShare to FacebookShare to Pinterest
Labels: cornet

Email ThisBlogThis!Share to TwitterShare to FacebookShare to Pinterest
Labels: recipe

What Harold Camping did for me.

Having wrongly predicted the end of the world for the second time Harold Camping may seem the ultimate figure of fun. In fact I have a feeling that his name might well enter the vocabulary in the way that the mythical Ned Ludd gave his name to the luddites. Mr Camping may be seriously misguided, a fraudster or a liar. You can take your pick, but he has made people think about the moment rather than the future or the past. For about 48 hours we all thought about where we are now rather than where we might be tomorrow. I went out clothes shopping with my daughter yesterday and we had a very good time enjoying the small things that life brings.

Maybe this is the lesson we can all learn from 21st May 2011. Enjoy life for what it is and while you can.
Posted by Gordon

Having spent part of today sorting out a charity's online donation page I was keen to have a look at what other charities' forms looked like and how they handled the process.

I was surprised to see that Cancer Research UK had a certificate error caused by them using two canonical names with one certificate - this would work with a wildcard certificate, but not the one they have.


Then I searched for the NSPCC online donation page through Google and came to this page which has a message from their web developer about their CMS and an SSL error - in this case some insecure content on a secure page.


None of this looks good, especially given the resources these organisations have. Its nowhere near good practice.

Interestingly I then searched for Barnardos Scotland on Google which displayed a link that was a 404 error, although manually typing the displayed address in worked. Thats a Google fault rather than a barnardos one though.

All very interesting, and I suspect the result of insufficient ongoing testing of their web site processes. I know from my time in the web hosting and domain registration industry that we had to regularly test our order processing systems to make sure they were behaving as expected.
Posted by Gordon

Why I have rejoined the Labour Party

Following last nights Scottish election results I have rejoined the Labour Party after a gap of over 20 years. I had been considering this for some time, but had satisfied myself with contributing through the political levy and voting in leadership elections through my membership of my union (Unite). I was one of the many young labour activists who drifted away from politics after the 1987 general election defeat. Like many, I ended up in campaigning roles in the voluntary sector, and in lobbying of one sort or another for important causes, but it is clear in hindsight that real societal change requires engagement with the political process. So this morning I decided to fill in the online membership form and rejoin Labour.

Why Labour? Well I have always been concerned that although we are all made the same, some of us seem to get a better chance in life than others simply because of the circumstances we are born into. This diminishes society and makes us all lesser people. I also think that poverty is wrong and any political party which accepts a level of poverty in order that some may be rich is immoral. If i was to come up with one statement of my concerns and beliefs it would be Fabian Society Tract no 1 “Why are the many Poor?” Written in 1884 by W L Phillips (click here to download or read it as a PDF file - you will be glad you did). The world may have advanced since 1884, but those core questions about inequality and our response to it is still at the heart of the Labour Party. Those are my values and only Labour is committed to defend them.

Now, before any reader shouts at me, yes there are other parties which claim to hold to socialist ideas or have a heritage of some sort in the Labour movement. None of these has ever achieved a single change that benefits the poor, and most resemble new religious movements with cults of personality and constantly shifting memberships. The only player in town is Labour, and although the party has changed policies regularly over the years, it has stuck to those core values I mentioned above. That’s one reason why I can safely rejoin the party knowing that I don’t agree with all its policies. I don’t feel I need to agree totally to support the party’s aims, and if there is anything I disagree with I can always speak against it.

What I found most disturbing about yesterdays Scottish parliamentary election result is the number of friends who are active in opposing poverty and promoting equality, but who voted for the SNP. The SNP do not share these core values. I am sure that most SNP members do, but its not what’s at the heart of that party. Their commitment is solely to  independence (beyond which they make no policy prediction or commitments).

The other disturbing aspect of these results is the real danger that voting Labour may become as incompatible with being Scottish as voting Conservative did in the 1980’s. I am not saying its gone that far yet, but there is a real risk of this unless the Scottish party carves out its own identity and connects with the core Scottish values of fairness, hard work and looking out for others. These are also Labour’s values and they need to be kept central to Scottish political debate.

At a practical level, Labour is going to need to learn from the trade unions and engage with people through campaigns that involve real engagement, not just run from a central office or just at election time.

What can I do to make a difference? In reality probably very little, but I hope that at a local level I can do some practical work to ensure we maintain Labour representation at local and Westminster level as well as helping to engage people on the real issues.
Posted by Gordon

We just did this in the office so here is my prediction:

*Margo MacDonald although I have a sneaky suspicion she might not make
it this time.
Posted by Gordon