Last week I got a knock on my door from a representative of McQueens Dairies* trying to get me to sign up for milk deliveries. The problem is that my street recently became a "No Cold Calling Zone". This came about because a number of pensioners in the street had been conned out of money by bogus door-to-door salesmen or pressured to sign up to things they did not want. It has been pretty effective with only McQueens (this was their second visit to me), and a few bogus charity collectors ignoring it. To become a No Cold Calling Zone 70% of the residents had to vote in favour. Not 70% of voters but 70% of residents so the vote had to have a very good turn out. The vote was administered by the City of Edinburgh Council Trading Standards department and was pretty unequivocal. We even have signs on the lamp posts telling potential salesmen that they should not call. Nobody in the street is likely to buy anything at the door these days.

So enter McQueen's Diaries. On their last visit I had mentioned the new No Cold Calling Zone and given them the benefit of the doubt. This time I pointed out that we had voted that we did not want people knocking on our doors and that they should not be doing so. The salesman then became aggressive, saying that it was only advisory not the law (true), that they had it all "sewn up legally" and there was "nothing we could do about it". Clearly, he had come across this before and had a rehearsed speech. The next thing he came out with was "we are exempt because we already do business in this street" (not true, and he presented no evidence that they do have customers in my street - I have never seen a milk delivery) , and that they were also exempt "because we sell products under a certain price" (not true). When I corrected him he got more aggressive and I had to ask him to leave my property or I would call the police. Fortunately he left, but I was pretty unhappy about his behaviour and did wonder if he might come back and "have a go".

I am not convinced this was an isolated case because the salesman claimed the company had received legal advice and he used very precise wordings in response to me. It was also interesting that although he stated that No Cold Calling Zones were not "the law" he went on to give a list of reasons why McQueens were exempt from the law!

There ARE exemptions to the No Cold Calling Zone rules such as:
McQueen's Dairies are not exempt as everyday traders because they are getting you to sign up to a contract, not a one-off sale or a regular casual agreement. Agencies acting for charities are probably also not exempt, especially if they are selling lottery subscriptions.

So, maybe there is nothing I can do to force McQueen's Dairies to respect our No Cold Calling Zone, but I CAN make other people aware of their practices. Have you had McQueens knock on your door?


* I believe this company is McQueens Dairies Ltd of 1 Keppochhill Place, Port Dundas, Glasgow, G21 1HS. The lack of apostrophe in the name is their choice. 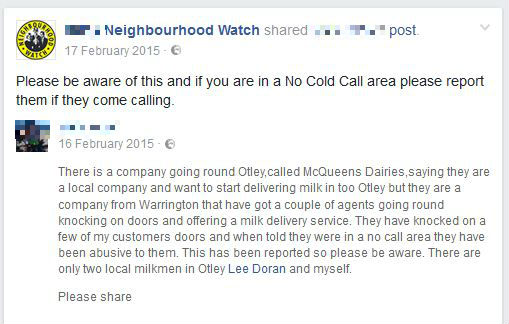