I am not on a quest for the perfect cornet mouthpiece.

I am not on a quest for the perfect cornet mouthpiece. I only want to find one that is suitable for playing in a brass band, compatible with my trumpet mouthpiece rim and lets me make the most of the ability I have. My trumpet mouthpiece is a Horntrader 3C based on Arturo Sandoval's New York Bach 3C mouthpiece. This is smaller than a current 3C and has a slightly sharper inner edge.

My first attempts at getting a match involved going through some mouthpieces I already had:

This is sold as a Flugel mouthpiece, but it is on par with a Wick no letter cornet mouthpiece. Mine has a cornet shank. I tried this with their 3C and G rims. The G was closest to the Horntrader rim, but the mouthpiece was quite hard going.

I had used this mouthpiece for a year when I was undergoing dental surgery. It really reduced the amount of effort I had to put in to get a nice sound. The inner edge is a very good match for the Horntrader, but the overall rim shape is too wide and I found it sacrificed my ability to play very  articulated passages or big intervals. It also went in slightly too far and may have created a ridge where the receiver joins into the lead pipe (no step or gap in this design of cornet).

Because neither of these was a serious option I decided to look at other mouthpieces in the same size range. I am currently trialling a Wick 4 and an IP Brass mouthpiece.

This is a well-known mouthpiece, used by a large proportion of brass band cornet players.

Here is an overlay of the Wick 4 rim (in yellow) with a Bach New York 3C, which appears to be very similar to the Horntrader rim. 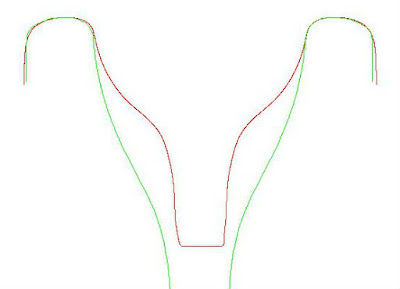 The IP Brass mouthpiece, designed by Ian Porthouse, has a stated inside diameter of 16.44mm, which makes it fractionally smaller than a Wick 4 which is 16.5. However, mouthpieces are very difficult to measure. The size you read off will depend on where in the cup you measure the diameter. This point varies from manufacturer to manufacturer. I measured it as 16.27mm. What I can say, though, is that the IP Brass mouthpiece is in the ball park area of a Wick 4.

By overlaying a scan of a Wick 4 onto the design of the IP Brass and scaling them to be similar we can see a number of differences to the shape of the rim and cup. The yellow line is the Wick 4. 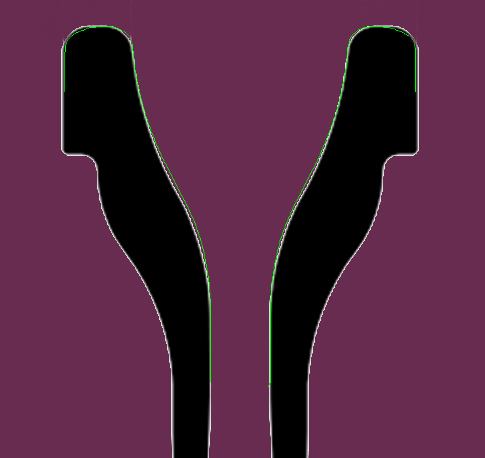 Rim: The IP Brass rim is flatter and more symmetrical in shape than the Wick. It also has a slightly more defined inner edge which may account for the slightly smaller diameter. This may improve stamina a bit.

Cup: The IP brass mouthpiece is a bit deeper than the Wick. It has more volume in the bottom of the cup, which is something known to aid with articulation.

Blank / Mass: Probably one of the most important features of this mouthpiece is the fairly uniform thickness of material between the cup and the outside world. There is no heavy additional mass anywhere and no scooped out thinner sections like on the Wick.

Rim wise, the Wick 4 is closest to the Horntrader but there is not really a lot in it. The IP Brass  mouthpiece has slightly more bite and has a bit more room in the bottom of the cup which might help with articulation. All three feel similar enough that switching between either the IP Brass or the Wick 4 on cornet and the Horntrader 3/3C on trumpet would be feasible. It is just going to depend on how I feel the two cornet mouthpieces shape up in practice.

The criteria I am judging it on are:

I will report back later.

Some famous cornetists of the music hall era.

There was a time when very few people played the trumpet and the cornet ruled the brass section. This ended in the early 30's when dance band cornet players started switching to trumpet and classical composers phased out writing separate cornet parts in favour of the Bb and C trumpets.

If you went to a music hall in the UK prior to 1930 you might have seen one of these cornet players: 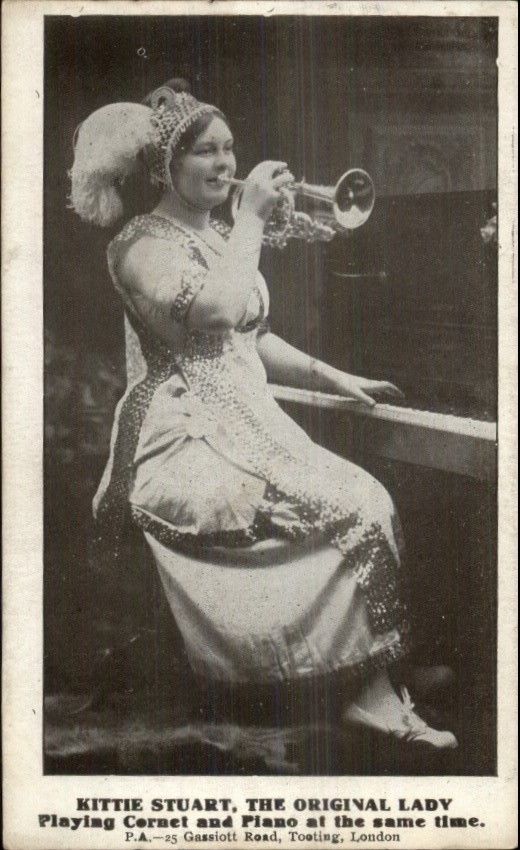 Kittie Stewart toured UK music halls during the First World War. Her unique selling point was that she could play the cornet and piano at the same time. 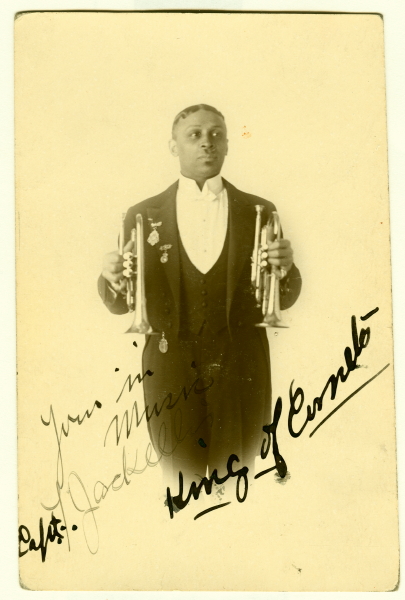 Sticking with the "playing two instruments at the same time" theme, Kittie Stewart toured for a while with a band featuring Captain T Jackellis - who billed himself as "King of the Cornets". Jackellis (his spelling, and presumably his surname) could play two cornets at the same time!

Evelyn Hardy had a long career as a cornet soloist and then as a trumpet player fronting her "Ladies' Radio Band".

Evelyn Hardy and her Ladies' Orchestra. Relayed from The Blenheim Gardens, Minehead
Trained by the late Captain William Short , the King's Trumpeter, Evelyn Hardy has had much success in the music-hall and concert world, both as a soloist and in ensemble. The band has developed from a dance combination into a straight orchestra, and tonight will show its versatility by playing both kinds of music. (Radio Times, 28 July 1933)


Evelyn eventually settled in Teignmouth, Devon, where she ran a music shop (Evelyn Hardy's Music Salon), taught music, and continued to play with her band at least until the late 1940's. Someone wrote a poem about Teignmouth Pier which includes this verse:

While Evelyn Hardy and her All Girls’ Band played
We listened and watched and were sometimes amazed
At the skill of the dancers who took to the floor
There was no way you could get us through the door. (source)

Email ThisBlogThis!Share to TwitterShare to FacebookShare to Pinterest
Labels: cornet

With more people watching YouTube videos on large screen smart TV's it is becoming essential to film your videos in HD. If you own a consumer level compact digital camera or a DSLR it will almost certainly have an HD video mode. 1080p is best but 720p is adequate. Your iPad or mobile phone probably also shoots in HD, but the YouTube app may default to uploading in lower resolution. Make sure you actually upload in D.

There is nothing worse than shaky video, or wonky camera angles, so if you are speaking to camera or interviewing someone use a tripod. I use a Hama tripod from Amazon which cost less than £20 (link). If you are using a mobile device you can buy a cheap adapter that will allow you to fit it to a camera tripod (link to an example).

3. Get an external microphone

The microphone in your camera or mobile device may be OK, but it will never be as good as an external microphone. Mobile phones and iPads can accept external microphones through USB adaptors or directly into the headphone sockets. For music I use a large diaphragm condenser microphone into my iPad (video). For speaking to camera I have started using a Boya BY-M1 Lavalier Microphone (tie clip type). This was £15 from Amazon (link).

Many YouTubers use shotgun microphones. These are great for outdoor filming, but as they are further from the speaker most cameras tend to add noise through the automatic gain control. If you want to try one then the Takstar SGC-598 is an inexpensive microphone that gets good reviews.


4. Edit your videos to give them more pace

Edit out any gaps or gaffs. You do not need to buy any software. The YouTube Creator Studio has a free editor that can handle most basic editing tasks (link). It also has transitions like cross fade between shots plus effects like image stabiliser, slow motion and convert to black & white.

J.R LaFleur & Son were an instrument maker founded in London in 1862 who were acquired by Boosey & Co in 1917. Boosey merged with Riviere & Hawkes in 1930 to become Boosey & Hawkes. LaFleur was maintained as a separate company until the 1930's. Then the brand name was "retired".

Sometime in the 1960's Boosey & Hawkes had the opportunity to buy in budget priced instruments from Eastern Europe - mainly from VMI of the GDR (East Germany) and later Amati of Czechoslovakia.

VMI was based in Markneukirchen and is now known as B&S. This was a collective of factories under communist control making all sorts of brass and woodwind instruments. The people making them were German Speaking Czechs from the Sudetenland who had fled the Russian occupation which happened at the end of the second world war. After they left, the Czech authorities re-established production in collectivised factories using the old names (Amati and Cerveny).

By the 60s, VMI in Markneukirchen was manufacturing student level instruments under the "Weltklang" brand (German for "world sound"). Boosey and Hawkes thought this sounded too Germanic and the word "klang" would make people think they sounded bad so they had them engraved as "La Fleur by Boosey & Hawkes". The same instruments were also imported by Barnes & Mullins Ltd and branded as "B&M Champion". I saw these for sale in an Edinburgh music shop as late as 1994, which must have been old stock. The same instruments were also sold under the Weltklang name by people importing them directly or who had obtained them from bands visiting East Germany who were often part-paid in instruments they could then sell on (Kenny Ball had this arrangement with the East German authorities and mentions it in his autobiography).

By the late 90's Eastern Europe had collapsed and there was no more subsidised production to earn foreign currency. Boosey & Hawkes decided to establish their own factory in India using tooling from some of their previous ranges of British made instruments. Indian production of the 1000 series trumpet and cornet replaced the previous East European models.

As to quality, well these are sturdily built instruments. Generally the intonation on the trumpets, cornets and flugels are OK. They are as good as the current cheap Chinese ones, and in some ways better as they are more easily repairable and the sturdier construction makes serious damage less likely. It is a question of trying out an instrument and seeing if they are any good. The cheapest trumpet I ever bought was one that turned out to be a Weltklang stencil which I bought recently for £23. It turned out to be OK (video).

Sources of used trumpets and cornets in the UK

If you are looking for a second-hand cornet or trumpet in the UK you have a number of options.

Most specialist brass shops have websites and will sell by mail order. Here are a selection of links to the second hand pages of some of these dealers:

Here are links to searches restricted to results from the UK:

You need to pay buyers premium and they won't usually post items, you need to be able to collect. There are a few online bidding services used by auction houses. Here are some of them.

You might find trumpets and cornets for sale in charity shops and local pawnbrokers. This would require regular visits as their stock changes regularly.