I have just spent an enjoyable afternoon listening to various jazz records including a live recording of Alex Welsh on We7. You can here it here (may require free registration): 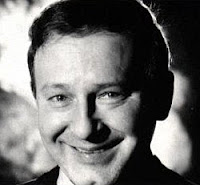 As I am about to head out to a concert at the Edinburgh Jazz Festival I thought I should point out that Alex Welsh came from Edinburgh. Not many musicians do. Its a small city and with all our festivals we tend to be awash with players from outside. Alex Welsh learned to play the cornet with Leith Silver Band along with a friend of mine (now in hos 80's and still playing). He was one of the select group of jazz trumpet players who chose to play mainly cornet rather than trumpet - others include Warren Vache, Digby Fairweather, Wild Bill Davidson and Ruby Braff. Alex Welsh died in 1982. Accroding to Digby Fairweather, in his book Notes from a Jazz Life, Welsh was told by his doctor that if he drank another bottle of Vodka he would die. So he took a bottle of vodka and died after drinking it.

Don't let this story put you off though. Alex's music is joyful, warm and full of life. Its a pity that his recordings tended to be across smaller lables as it means there are not too many available to buy these days, but if you keep an eye out you will find them, although perversely you will rarely see or hear of him in Edinburgh.
Posted by Gordon

Anders Breivik - a wake up call to the church

As I am writing this the BBC News Channel is still showing blanket coverage of yesterday’s bombing and shootings in Norway. I think its come time for me to reflect on this and what we can learn from its religious elements. Anders Behring Breivik self identified as a Christian. It doesn’t mean that he was (just as “muslim” terrorists may not really be Muslims). There is no evidence that he attended a church, but he did frequent online fundamentalist Christian web sites and online communities.

The question we have to ask though is: how can someone with Anders Breivik’s views identify with Christianity?

There are two issues which I believe attract this sort of identification:


So who is to blame? I am sorry to say that the blame has to be laid at the door of the mainstream churches and moderate evangelicals. The former have become so tied up in accepting fundamentalism as an alternative “faith expression” that they can’t be openly critical of it, and the latter are so in awe of fundamentalists church growth abilities that they have become untouchable.  Anything is permissable as long as it can be described as "just the lunatic fringe”.

I am not sure what the answer is, but evangelicals and fundamentalists are desperate to be part of something significant. Can the mainstream churches or the moderate evangelical churches (like the Free Kirk or the Baptists) provide a platform for them, or like the grand old duke of York, march them up to the top of the hill and march them down again? I don’t know, but the mainstream churches and evangelical leaders in Britain need to take a long hard look at themselves and ask why they have not been openly critical of fundamentalism.

(Is this not exactly what we say about moderate Muslims and extremism?).
Posted by Gordon

If you have a low resolution copy of a logo that pixelates when you make it larger you can use this method to get a higher resolution version. It won't be totally accurate, but it will at least get rid of the pixelation. This method will not work for photographs, just for line art type logos.

Here is what you need to do (steps 1 and 2 are optional but may prevent the breaking up of lettering in the logo):
You can go back to the vector version at any time to make a new version in a different size.
Posted by Gordon

Email ThisBlogThis!Share to TwitterShare to FacebookShare to Pinterest
Labels: howto

Fox news and the death of Barak Obama

Fox News had its @foxnewspolitics hacked over the weekend resulting in false tweets that President Obama had been assassinated. These have since been removed but you can see a screen capture here (click on image for larger version): 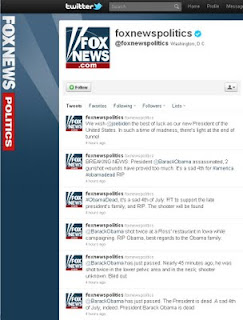 Fox have now issued a statement and

will be requesting a detailed investigation from Twitter about how this occurred, and measures to prevent future unauthorized access into FoxNews.com accounts