I noticed a while ago that the pro independence blogger Stuart Campbell (www.wingsoverscotland.org) sometimes uses the title "Rev". I haven't been able to determine what organisation ordained him. He could be a former minister of some denomination, but his biography does not mention any church activities.

Leaving this aside, it did make me wonder what you would have to do to be "ordained". I do remember someone in Edinburgh who had served as a pastor of an independent church for many years searching for a US evangelical organisation that would ordain him based on his experience. The ordination took place, I believe in absentia in the US, and he was conferred with the title "Reverend".

Ordination seems to be easy to come by in the US, usually driven by a requirement to act as a marriage celebrant, or in some states the ability to operate as an alternative therapist (ordination covers the "laying on of hands" for insurance purposes). In one episode of the Simpsons, Homer gets himself ordained through an online service, prints out his own clerical collar and starts marrying people.

www.ulchq.com
Submitted the form and had a very swift, and personal, email reply asking if I was the same Gordon Hudson of another address. This was, in fact, an old address of mine, and I have a vague recollection of having submitted a similar form at some time about ten years ago. It appears I am already ordained! It is as legal as any other church's ordination, but most would consider it "irregular" under their ecclesiastical laws.

www.themonastery.org
Submitted the form online and received an immediate confirmation of my ordination. There was an option to buy a certificate for $7. According to the original ULC (www.ulchq.com) this is not associated with them at all and has only existed since 2006.

I also came across a British web site selling online ordination for £35, claiming that this would give people the right to act as a marriage celebrant:

www.onlineordination.co.uk
The company United Europe Church Ltd was only formed in March this year and unlike the other two that allow any belief, this has a strictly evangelical Christian statement of faith.

I am not convinced that the Registrar General for Scotland would recognise this as valid for marriages. My understanding is that all Church of Scotland ministers automatically have the right to perform marriages in Scotland. Ministers of other denominations have to be officially nominated by their denominational headquarters and the registrar general limits the number to those he thinks are necessary for those denominations. Ministers of independent churches need to be nominated by their congregational decision making body. If you were to start your own church I suppose this might work, but you don't need to be ordained to act as a marriage celebrant, having a congregation is sufficient. For example, Brethren meetings and Churches of Christ who have no ordained clergy usually nominate an elder to carry out marriages. It is also not permitted to earn a living as a "celebrant" in Scotland, even though quite a few Humanist's seem to do this.

What genealogy tells us about the accuracy of the bible.

I am an amateur genealogist, and have plotted family trees for a variety of people. It combines my interest in history with my eye for detail and research. You will find articles about my own family history elsewhere in this blog.

Before I start plotting a tree I ask people for the names and dates of their parents, grandparents and any other relatives they know of. Then I ask them for any family rumours and legends. Its interesting that although some of these legends can seem quite bizarre 70-80% of them turn up in the evidence and are more-or-less true.

What does this say about the veracity of the gospels? Well, just because the stories in the gospels appear to be fantastical we should not discount them. The gospels only tell snippets from the life of Jesus. As these were initially passed around by word of mouth, people were more interested in remembering the unusual things that happened.  So in the written gospels it tends to be the more interesting and unusual aspects of Jesus life that are recorded. There are no records of his shopping trips or toenail trimming, although he must have done those things. The emphasis is on the unusual, and because these occurrences were unusual they were remembered, passed on and eventually written down.

Churches in Edinburgh on social media

Most active churches seem to have a Facebook page these days, but these get little interest outside the members. In some cases they have a tenth the number of likes as they have members. Generally they seem to be sharing information about events within the church with members.

When it comes to Twitter the searches I did were quite disappointing.

Christianity Edinburgh does not fare much better.

What there is of church activity on Twitter seems to be either  the equivalent of the dayglo TBS bible posters you used to see at railway stations (click here to remind yourself) or the equivalent to the church newsletter. There is very little real communication going on between real individuals. There are also very few Christian bloggers in Edinburgh. This does not reflect the stated desire of so many churches to reach the people of Edinburgh.

What do you think?

The "Gospel of Jesus Wife" and why it changes nothing. 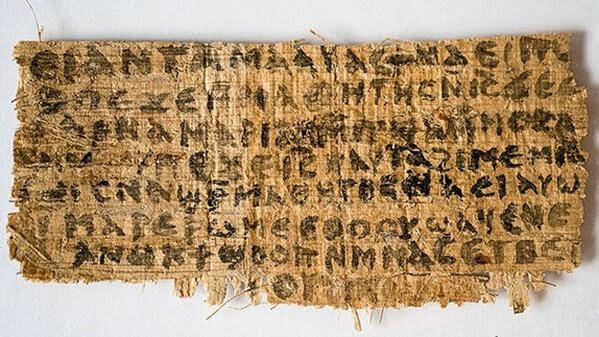 I follow a range of people on Twitter and on the issue of this small fragment of papyrus they fall into two camps:

1. The academics like Larry Hurtado, who sums it up in this article (worth reading in full as it mentions the problems with the Coptic in the fragment - for more on this see Mark Goodacre):

.... even if authentic, the fragment would have no bearing on (1) the marital status of Jesus of Nazareth, (2) the question of women’s role in churches, (3) the question of Catholic priestly celibacy, etc.  None whatsoever.  Nada.


2. Atheist critics, who seem to have seized on the fragment's recent early carbon dating by MIT and Harvard  as evidence that it must be true and therefore the gospel accounts of Jesus life aren't.


The odd thing, of course, is that the carbon dating puts it at 700AD, far later than the canonical gospels. If any of the four canonical gospels were found to be from 700AD the same critics would be using that dating as evidence that those documents could not be accurate. I guess that a late date can be used to cut any way you want it to.

I had an interesting issue displaying a Powerpoint presentation using the Impress presentation program in Libre Office. Although Libre Office has no problem opening the .pptx file from Microsoft Office 2010 the slide layout was wrong and text was overflowing.

The reason was that the font in the original Powerpoint file did not exist on the other machine, which was running Linux Mint 16. Impress was substituting with a similar font which was not as condensed so the text was overflowing the original Powerpoint layout. This surprised me as I had already installed the Microsoft Core Fonts. However, this does not include Calibri which is the default font in MS Office 2010 and the font which had been used in these slides. To fix this I copied the Calibri true type font files from my Windows 7 laptop over to the Linux one.

Here is how to do it.

Note: Your system may not be set up like mine. Attempting this could break something. Beware.

On the Windows PC:

On the Linux PC:

This copies the fonts into your font directory.


Which refreshes your font cache.


For information, the way to install the standard Microsoft fonts is to use this command:

The amount of spam I am receiving has decreased, or has it?

Having moved me email domain between three different hosting services this year I have noticed a big variation in the amount of mail being trapped by my spam filters. The rolling thirty day average has been:

Why the big difference? Well, all hosting companies use real-time blackhole lists (RBL's) to prevent the most blatant spam from getting through. This has more to do with protecting mail servers from overloading than protecting customers from spam. When a mail server connects the receiving mail server looks up that server on a list and denies connection if it appears on it. This prevents the server having to open, write to and close a file, saving processing and I/O resources.

Real-time blackhole lists are lists of mail servers known to be originating spam. There are many in existence. Some are more severe than others. Some block whole countries, some never remove a server once it has been detected sending spam. My guess is that Host 1 was using something like Spamhaus to temporarily block the worst offenders, Host 2 was not using RBL's and Host 3 is using something far more severe.

One slightly worrying aspect is that I am currently unable to receive receipts by email from a company I buy IT gear from. This may be because the server generating them has been blacklisted. There is no real way of knowing for sure.

Email ThisBlogThis!Share to TwitterShare to FacebookShare to Pinterest
Labels: email

I thought I would post this article as there are a number of out of date articles about this floating around the internet.

I recently bought a Zoostorm model 7873-9043 laptop from Ebuyer (the pink one they sell for £280). It is manufactured by Clevo (the Clevo model number is W251EL) and very nicely specified.

I installed Linux Mint 13 which is the current LTS (long term support version) and the WiFi would not work. The WiFi chipset is RTL8723AE. Some articles I found are suggesting installing windows drivers or downloading unofficial drivers via Realtec staff.

I had a look at installing drivers, but this did not make sense as the WiFi had worked when I had tried a live disk of the latest version of Linux Mint. The problem seemed to relate to the version I had chosen to install, which was 13 LTS. On examination I could see that the drivers were there but I could not turn the card on even using manual commands. I think there are software switches required in relation to this chip set which are only present in more recent Linux kernels. Mint 13 is kernel 3.2 whereas Mint 16 is kernel 3.11.

So I experimented with updating the kernel in Mint 13 to 3.11. Although the OS worked as before and the Bluetooth worked the WiFi still did not.

Rather than faffing about with drivers, the simplest way to make it work was to install Linux Mint 16. When I did this the WiFi worked straight away. The driver loads every time i start the machine and it automatically connects to my WiFi. Linux Mint 16 is not an LTS release, but it will be by the end of May 2014 and it seems stable already.

I hope this helps someone else avoid the heartache of trying to install drivers unecessarily.