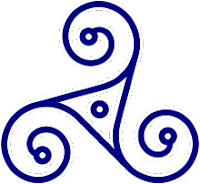 In Steiner's view society is divided into three areas of activity:

Economics
Some people have skills and some people have a need for those skills. The role of economics is to match these up with each other for the betterment of human beings.
The principal value in the economic sphere is: brotherhood and cooperation

Culture
This is activity which works with the spiritual development of individuals including spirituality but also wider cultural activity like art, music and other areas of creativity.
In order to develop, each individual must be free to think for themselves. Steiner covered this in his major philosophical work “The Philosophy of Freedom” which proposes the concept of the ethical individualist.
The principal value in the cultural and spiritual sphere is: freedom

Politics
This is the work of the state and the law, which is required to hold society together. However, the state must act in a just way.
The principal value in the political sphere is: equality

These three principal values mirror the motto of France which originated during the French revolution: Liberté, égalité, fraternité.

For society to function healthily the three areas of activity (economics, culture and politics)  need to be held in balance.If one dominates then society will not function properly.

Under a communist or fascist system where the state is dominant there is no freedom and the economic system can not match needs with skills. This incorrect balance can stop society from functioning properly.

Under a capitalist system which puts heavy emphasis on economics and profit culture and spirituality will be squeezed out and equality will be threatened as the ability to access certain things is governed by how much money someone has.

In an anarchistic or libertarian system where there is freedom to do as the individual pleases, without any ethical consideration then equality and cooperation will be reduced and society will not function well enough to produce the food and other resources needed for survival.

The threefold social order seeks to hold the three spheres of activity in balance so that no one of them dominates and each can support the other. At the heart of this is the ethical individualist taking responsibility for his own actions in those spheres through the correct use of money, ensuring his own spiritual and cultural development and upholding equality. These values can be seen in the various anthroposophical initiatives in education, social care and banking.

The challenge of social threefolding is that it puts the emphasis for the welfare of society back on the individuals within it. It does not seek answers from government, but from each member of society. For that reason it is impossible to fit the concept within existing political structures. It is neither socialist or capitalist, neither left or right wing, neither liberal or conservative. It is, however, a concept which matches modern society’s move towards individuals rather than communities. The threefold social order may provide a framework within which individuals can act to improve the way that society works without formal political structures and without the vagueness of the recent "occupy movement".
Posted by Gordon

Are fundamentalist Muslims and Christians that far apart?

I don't see any difference between this muslim man's views and those of many Christians - "allah makes the laws - he's the one who tells us whats allowed and what's forbidden" and "this community is a dirty perverted community". Many fundamentalist Christians would say exactly the same things. Some on the Christian Right are equally against the idea of representative democracy, usually pointing out that in the old testament there were divinely appointed kings with non Christians just having to tow the line in a brave new world of theocratic rule.

Islam is opposed to abortion and the teaching of evolution. If Christians can support Mitt Romney (a Mormon) because he is good on these BIG issues then why not support the Muslims?

My suspicion about why they don't is that some Christians dislike Muslims for reasons of race rather than reasons of faith.


What we have is an issue of double standards. As the satirical Daily Mail Style Guide tweeted last week:


Religious symbols: Crucifixes at work are a matter of religious freedom. Headscarves at work are creeping Islamisation and should be banned.


Incidentally - the argument about Muslims taking over the country by having bigger families was exactly the same argument used against Roman Catholics in Scotland at one time.

How to set up an iPad to synchronise Google Mail, Contacts and Calendar


This article explains how to set up an iPad to synchronise correctly with a Gmail and Google account for calendar, email and contacts. This method has been tested on my iPad 2 running iOS 5.1 and iOS 6, but it should work with the original and new iPad. It may also work with other iOS devices like the iPhone and iPod Touch, but I have not tested it on any of these devices.

When you have completed this process the default iPad email app will use your Gmail account to send and receive mail (you will not need a separate Gmail app) with push notifications of new mail; your Gmail / Google contacts will appear in the default Contacts app and be accessible from the email app and your Google Calendar will appear in the iPad Calendar app. Any changes made to these on the iPad will be sent automatically to Google’s servers and appear on the web versions or on any phone also synchronised with it over the Internet. No cable connections are required. It all happens automatically. I use an HTC Android phone and changes made to the calendar or contacts on it or on my iPad copy over to each other.

The secret to making this work is that you need to add your Google account to the iPad as a Microsoft Exchange account. It might surprise you to know that your Google Gmail account is exposed as an Exchange service, but Google do this to allow calendar and email compatibility for companies moving from Outlook to Google Docs for Business.

Here are the step by step instructions:

Touch on the “done” button.


Set which program will synchronise with which account
Go to “Settings” and touch on “Mail, Contacts, Calendars”.
You will now probably have two accounts listed:
Any others can either be ignored or set up as you require them. Any Gmail account listed should be deleted or disabled unless it is required for a different Google account as this method does away with the need for it and  is more reliable.

You want to have these set to show the following: 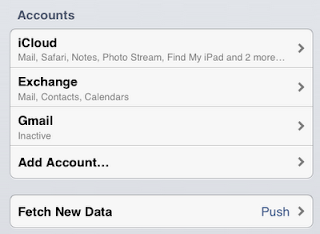 To do this Touch on each account in turn and set as follows. 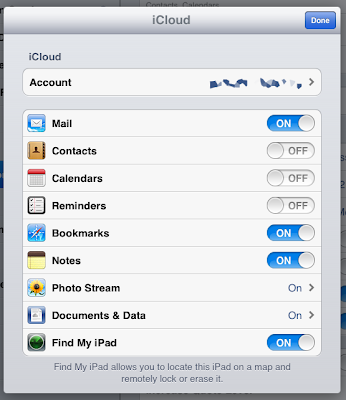 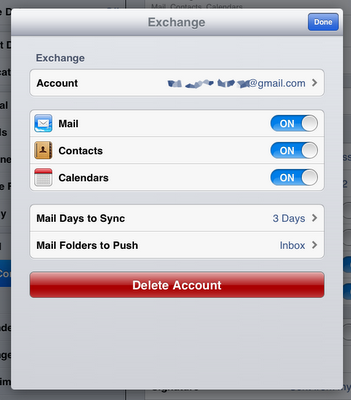 Note: You can choose to synchronise mail for longer periods if you wish, three days is just the default option.


Set default email account
The standard set up for the iPad is to have all mail sent from the iCloud email account by default. This can be very confusing and end up with replies to your emails going to this address by mistake so I have my iPad set to use Gmail by default. To do this:

Conclusion
I have been using these settings for months and it has worked perfectly. My iPad now synchronises with Google Calendar, GMail and Google Contacts on all my computers and my Android phone. I hope someone else finds this useful.

These may appear to be totally unconnected subjects, but they do have a common thread. Whether it is making a crop circle, stirring a preparation 500 for biodynamic gardening or celebrating the eucharist - something is being done with an intention and although nothing could be identified in the material with a microscope things seem to happen at a spiritual or energetic level. In the case of crop circles strange creatures may be sighted. With homeopathy an improvement in condition. With biodynamics a better crop yield.
It seems to me that the act of will involved in doing these things could carry an intention of goodwill and purpose which acts on another (etheric) plane.
I am a natural sceptic, but when I see a pattern amongst these disparate subjects it's hard to ignore. It is certainly very old wisdom as the Eucharist attests.
Posted by Gordon

Email ThisBlogThis!Share to TwitterShare to FacebookShare to Pinterest
Labels: anthroposophy 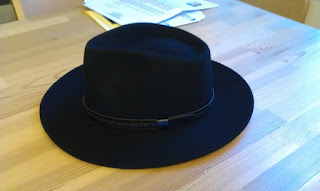 Friday was the 87th anniversary of the death if Rudolf Steiner. As I headed out to a screening of the new documentary The Challenge of Rudolf Steiner I reached for my hat only to notice, for the first time, how stereotypically anthroposophical it is. The number of anthroposophists who wear this style of hat from Peter Selg onwards must be quite high. However, I didn't choose this hat. It was bought for me by a friend who thought it would suit me, yet she has little exposure to anything Steiner related.
Maybe it's just a fashionable hat or maybe the hat chose me?

Some thoughts about hats as metphors of belief from Free Fall by William Golding:

I have hung all systems on the wall like a row of useless hats. They do not fit. They come in from outside, they are suggested patterns, some dull and some of great beauty. But I have lived enough of my life to require a pattern that fits over everything I know; and where shall I find that ? Then why do I write this down ? Is it a pattern I am looking for? That Marxist hat in the middle of the row, did I ever think it would last me a lifetime ? What is wrong with the Christian biretta that I hardly wore at all ? Nick's rationalist hat kept the rain out, seemed impregnable plate-armour, dull and decent. It looks small now and rather silly, a bowler like all bowlers, very formal, very complete, very ignorant. There is a school cap, too. I had no more than hung it there, not knowing of the other hats.