The origins of the Denis Wick cornet mouthpieces.


According to this 1970's Denis Wick leaflet the cornet mouthpieces were designed in association with Thomas Wilson, principal cornet player with the Scots Guards: 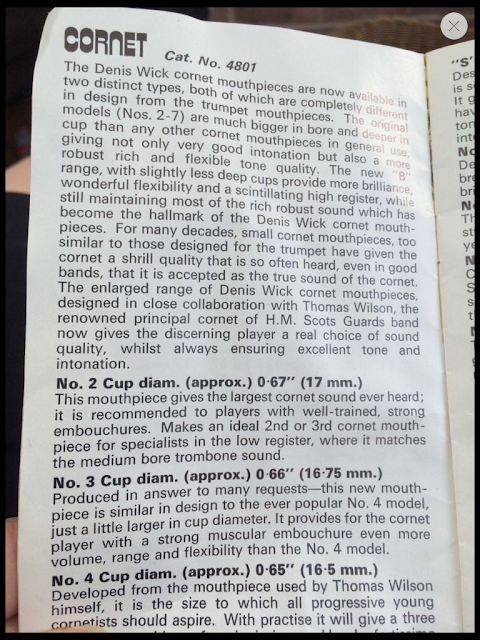 Here is a web page which tells you all about Tommy Wilson, who emigrated to Canada and also performed as a soloist with the Salvation Army:

In the early 1970’s I was asked by Denis Wick if I would help him develop a cornet mouthpiece – and the rest, as they say, is history. It was also round about this time I was asked by Boosey & Hawkes if I would help in the development of a new cornet for them. After a lot of hard work the first large bore Sovereign cornet was born. I still play the original prototype. It’s still going strong after over 30 years. It was stamped No. 1, (which causes the customs people more than a little curiosity when London Citadel Band goes on trips).

According to a mix of the Ashcroft constituency polls and general polling the outcome of the election will look something like this:

In this scenario the Conservatives would try to get support through either a formal coalition (as in the last government) or by "confidence and supply" agreements with other parties. This looks unlikley to work:

Conservative + Libdem + DUP + Lady Hermon (Ind) = 316 (10 short of the required 325, 7 short of the 323 that could technically form a majority without Sinn Fein MP's sitting in Westminster)

Labour would then try, but have a harder time at forming a majority:

If Labour does not do a deal with the SNP then David Cameron, as the leader most likely to be able to get close to a majority, will stay on as Prime Minister to see if he can get a Queen's speech passed. If he can't then he will probably give way to Labour and let them try.

At this point Labour will either do a deal with the SNP or we will head into a second general election in September.

One warning though: there is a nuclear option. If both the Labour and Conservatives believe that allowing the SNP any influence would be either too toxic or give them unnecessary credibility they might decide to form a "grand coalition" or "national government" with Labour and Conservative parliamentary parties forming one bloc in parliament. With Labour likely to be decimated in Scotland the effect of any fallout on Labour north of the border would be self limiting, making this scenario less unlikely than a few weeks ago.

And one final word on the general election campaign. The BBC Poll Tracker shows us that nothing that any of the parties did changed the outcome. Most minds were made up long before the campaign started: 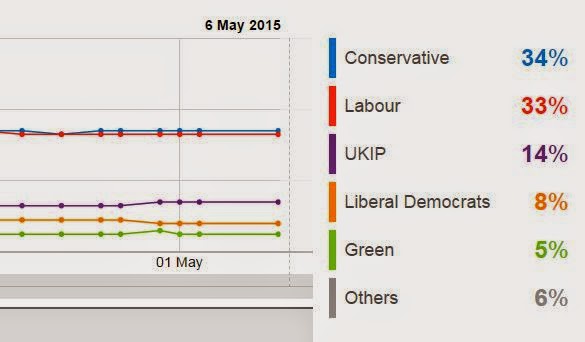 Procedure and timetable if there is a hung parliament

Here are the rules that apply if the general electon results in a hung parliament:

1. The Conservatives get first chance at forming a government as they are the incumbents.
2. If they can not secure one then the Prime Minister has to resign.
3. The Queen would then invite the leader of the largest other party to try and form a government (i.e. Ed Miliband).
4. If this fails then he could propose a Queen's speech and try and get it passed.
5. If this fails there could be a vote of no confidence and parliament would be dissolved for another election to take place (according to then Fixed-term Parliaments Act 2011).

As the new House of Commons starts sitting on Monday 18th of May this leaves only nine days for negotiations with potential coalition partners.
Posted by Gordon