The Mystery of the Bell Found in Coal

I try not to get bogged down in debunking specific bits of evidence advanced by creationists because I think the real issue is not scientific or pseudo scientific flim flam, but whether Genesis 1-3 is poetic allegory or scientific history and whether Jesus understood it as either. However, something caught my attention during a broadcast on Revelation TV last Friday night featuring Dr Grady McMurtry. Those not familiar with Dr McMurtry might like to read my previous article about him. During the broadcast he was asked by a viewer for evidence that the earth was in the region of 7,000 years old. In reply he gave a list of examples of evidence including the case of a brass bell found inside a lump of coal which would be impossible if the coal was prehistoric.

This is one of a number of evidencial claims which the largest creationist organisation Answers in Genesis lists as “to be avoided” due to lack of substantive evidence. The Answers in Genesis list (which can be viewed here) also includes other claims that Dr McMurtry has used in recent television broadcasts (including a pre flood canopy of water vapour surrounding the earth and the speed of light changing over time). That’s not to say that this Answers in Genesis not using these theories totally defeats his argument. After all they feel able to make the case for a young earth without using any of this questionable evidence. However, I think that using it does weaken his position as someone claiming to use a scientific approach to creation issues.

Having had my interest sparked I decided to investigate the bell story and this is what I found.

The bell was found in 1944 by a ten year old boy called Newton Anderson who dropped a lump of coal and found the bell inside. Mr Anderson kept the bell until 2007 when passed it to Genesis Park (a creationist web site run by Dave Woetzel). At this time he underwent polygraph tests to determine if he was telling the truth about the discovery of the bell and the result of this was that “no deception was detected”.

There are two parts to this story which need to be examined:

The Bell
The bell is made of brass (an alloy of copper and zinc) with traces of tin, arsenic, iodine and selenium. It is about seven inches tall and is mounted with a crudely described figure appearing to have one visible leg, two arms and a head. You can see detailed photographs of the bell here.

What does the figure on the top represent?
Newton Anderson himself spent some time investigating the bell and found similar bells bearing the figure of the Hindu deity Garuda. These bells are used in certain Hindu ceremonies including marriages. Here is a photograph of a Garuda bell. Now click here to see some detailed photographs of the bell found by Newton Anderson. 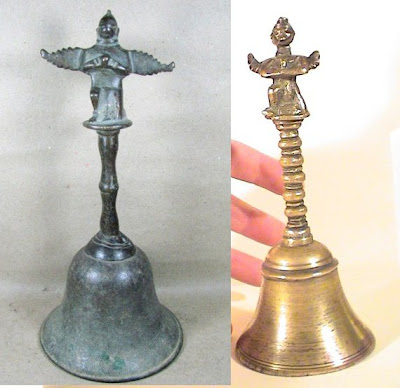 The photograph above shows a black and white image of a garuda bell on the left and the bell found in coal on the right. If you compare the two you will see a number of similarities. Note the leg appearing out of the casting. Whats interesting about the bell found in coal is that rather than be a smooth complete casting the figure on the top has a large number of filing marks clearly visible on it. If the filed areas are compared to the same areas on a Garuda bell it can be seen that removing those areas from the Garuda bell would produce an artifact with a very similar appearance to the bell found by Newton Anderson.

Here I have marked some of the areas that appear to have parallel, linear filing marks: 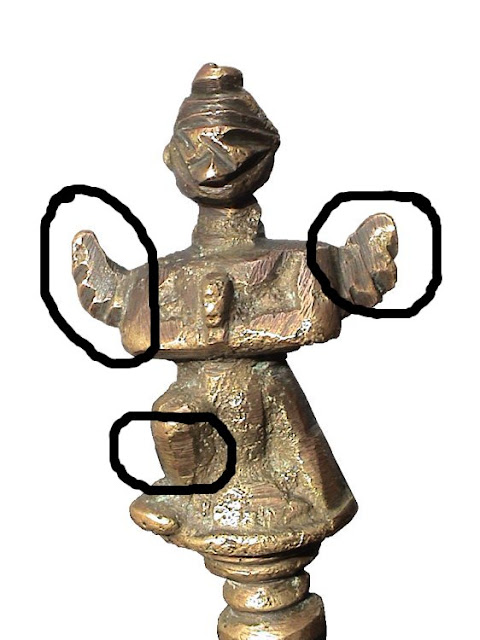 In my opinion the case put forward by supporters of the bell that it represents some demonic deity of pre flood times is not proven. It is more likely to have been made by obtaining a Garuda bell and removing material from it with a file. If the figure on the bell found in coal contained more material than the figure of Garuda (extra parts, wings or some other extremity) then it could not have started life as a Garuda bell. As it stands it is a distinct possibility that it did.
As for it being a representation of a demon, I have not seen any depictions of demons which equate with this image so if we are to assess what it represents then the Hindu deity Garuda (or at least a modified version of it) seems to be the closest. Depictions of Garuda have changed through the years and the oldest ones I have seen have a more elaborate depiction. This might be a further indication that this is a recent object (less than 200 years old).

What about the brass?
It has been claimed that the bell is made of an alloy of brass which is different from any modern alloy. The claim is that a nuclear activation analysis was undertaken which revealed that the bell contained copper, zinc, tin, arsenic, iodine, and selenium.

Copper and zinc are the main components of brass so they have to be present or it isn't brass. Copper and tin produces bronze and tin is sometimes added to brass to make it harder wearing (for use in bearings for example). Arsenic and Antimony are routinely added in tiny quantities to reduce corrosion, especially in brass used in ships.

Further to this, although it is possible to buy off the shelf bars of brass a lot of casting work relies on melting down scrap brass. In fact brass is one of the most recycled metals due to the value of the copper it contains. In any business casting non mechanical wear items like ornaments and clothes fastenings there will be little concern about what brass scraps go into the mix other than their price.

In my opinion the case that the alloy the bell is made from is unusual indicating some ancient origin is not proven. The presence of the additional metals actually indicates a recent manufacturing date not an ancient date, after the routine use of brass in ships and the discovery of the necessary additives. It is more likely that the brass started life as worn bearings and ship's  fittings from a breakers yard, and that it was manufactured by an artisan in India or elsewhere in Asia in the hundred years preceding its discovery.

What about the discovery of the bell in the coal?
The arguments about the figure on top of the bell and the constitution of the brass do not, in my opinion, point to an ancient date for this artifact. However, if it was found in a lump of coal then that either means it was buried in a swamp with ancient trees and it became coal (without being distorted by the pressure),  it was inserted into the block of coal later or it was present alongside the coal and only became visible when the piece of coal broke. All we have is the testimony of one person who says he found the bell when he was ten years old (over 60 years before he took the polygraph test). Polygraph tests are unreliable because they only tell us if someone thinks they are lying and there is no doubt that Mr Anderson believes he is telling the truth.

Another intriguing possibility is that the bell appeared to be in coal but was actually in a concretion of coal slurry and coal lumps hardened over time so that it appeared to be inside a contiguous lump of coal. This theory is expounded in this article.

Without documentary evidence from the time the story of the bell found in coal can not be taken as evidence for a young earth. Its just too far from what we know about geology and the artifact itself just doesn’t seem old enough.
Posted by Gordon