This is another cheap Chinese fountain pens like the Kaigelu 316 I reviewed previously. I bought this one from a UK supplier for £9 including postage. It was supplied without a box, but with a screw type converter. 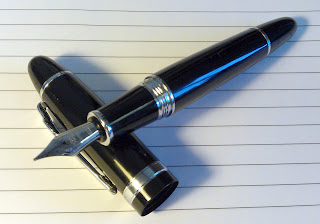 This is a BIG pen. It is 15cm long capped, 13cm uncapped and 17cm posted. The barrel is 15mm at its widest and the cap is wider still. This pen takes its proportions and general styling from the Montblanc 149, but rather than being a fake this is a "tribute" pen. It carries no branding or clip similarities to the Montblanc, which is a resin pen compared to this one which is lacquered steel. The Montblanc is a piston filled pen, the Jinhao uses a converter or international cartridges.

This pen is large and fairly heavy so you need to have reasonable sized hands to be able to use it. It is well balanced until you post it and then it gets a bit too top heavy.

Pens of this size will not fit many pen cases. I have heard that the paint is prone to chipping so I am carrying mine in a single Parker leather case which cost me £1 a few years ago. I think it was designed for a Duofold, it is certainly big enough to take the 159.

The nib is marked 18Kgp, but is clearly made of steel. As supplied it was a bit dry and tended to skip. I adjusted it slightly using SbreBrown's technique (video here - try at your own risk) and its now at the broader end of medium with no skipping and it will put ink on the paper without applying any pressure. The adjusting process has not made any visible difference to the nib. It probably only moved it a hundredth of a millimeter.

It is not the smoothest nib I have ever written with. There is some resistance on the paper, but there is no scratching and it is not off-putting. it may be that the weight of the pen is adding to the drag of the nib. With some care it would be possible to polish the nib and improve it further.

Pardon my poor handwriting, but here is a sample (ink: Diamine Onyx Black): 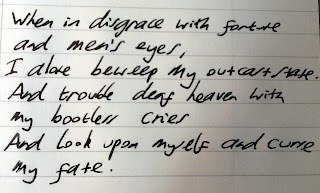 To me the question of whether a pen is any good is really down to how well it writes. This one writes acceptably well. I would say it was 75% of the way to being a very good pen, so on this basis I would give it four out of five stars.

Whether it is practical is another question. pens of this size tend to be bought as statements and mainly used for signing letters and contracts. Without the Montblanc logo I am not sure what sort of statement it is making.

If you want a very large pen it is well worth trying one of these.